where V is potential difference, W = workdone and Q = amount of charge moved. Factors on which the Resistance of a Conductor depends

The resistance of a conductor is

where ρ is a constant of proportionality called specific resistance or resistivity of the material of the conductor. 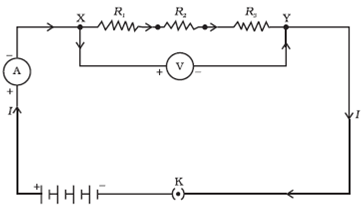 were V1, V2, V2 are the potential difference across R1, R2 and R3 respectively.

This energy is exhibited as heat. Thus, we have H = VIt = i2Rt.
This is called Joule’s Law of Heating, which states that

the heat produced in a resistor is directly proportional to the

Practical Applications of the Heating Effects of Electric Current